Twice we launched helium balloons and recovered the payloads 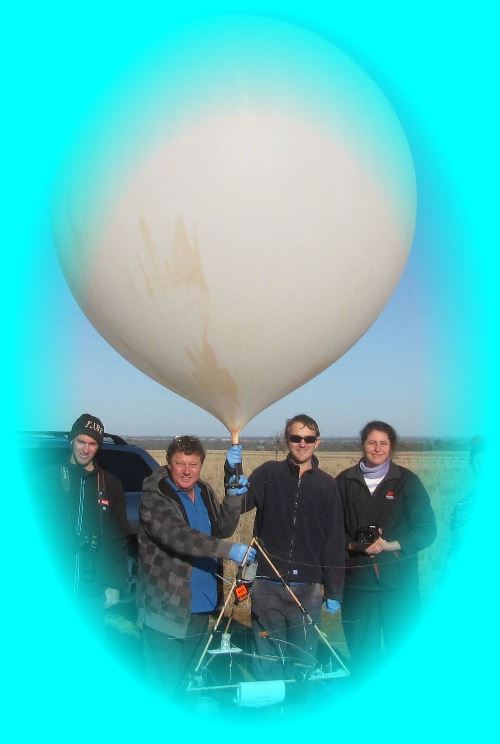 The following was written by David Nebe VK4DN, the Team Coordinator. 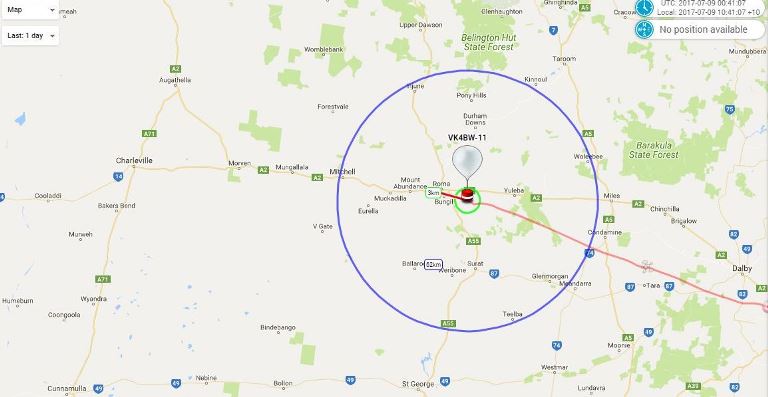 The projected flightpath for HABE 2
We always knew it was going to travel far and FAST!

We recovered the payload... 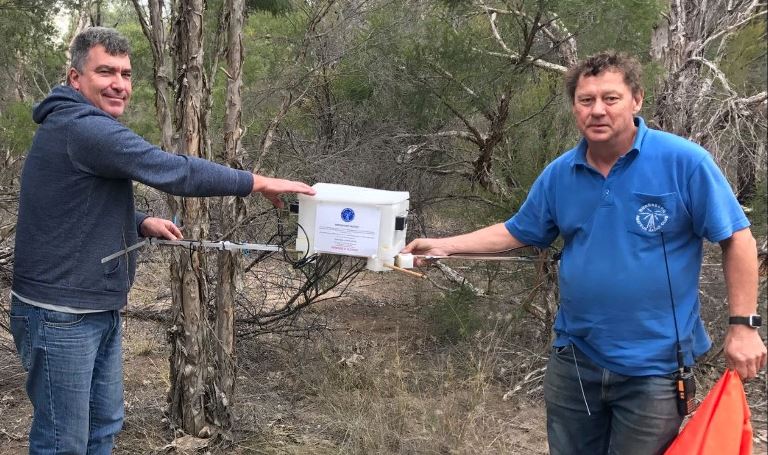 Dan VK4OH & David VK4DN with the recovered payload from HABE 2

Our July 2017 Launch and Recovery was a success

We launched from Roma on Sunday morning, 9th July 2017.

Dan VK4OH followed myself and Renee in his 4X4 on Saturday morning from Bundaberg to Roma.

We arrived with some daylight remaining and time to set up camp and scope out the best location for launch. Bryce VK4BRD, a local Amateur in Roma, already had the fire going.

We checked our computers to make sure we had an internet connection at the launch site and it was all good so we settled in with snags and a fire-side chat.

Bryce had organised permission for our camp/launch site from Christine, the property owner, and her family came out to watch the 9:30 Launch.

The local Roma newspaper reporter also arrived for an interview and photos.

The cameras and electronics were affixed inside and outside the foam box using zip-ties and double sided tape and we finally powered up with the batteries.

We started to fill the balloon with Helium on a clean tarp.
We'd run predictions using the habhub website which indicated the balloon would travel quite a distance so we opted to give the balloon a lot of buoyancy so it would get to Burst Altitude quickly so it wouldn't travel too far from the launch site.

The balloon lifted off at 10:15am, an amazing sight to watch and it gained altitude VERY quickly. It travelled at high speeds, and reached 240km/h in the Jetsteam at one point.

The Cross-Band radio (a Wouxun KG-UV8D) had issues but we did make a number of contacts during the flight, but not as many as HABE1 (it may have been an intermittent fault in the radio power supply.)

Once we had confirmation of the burst balloon we broke camp and headed for the approximate landing position along the highway to Tara for 3.5 hours.

The balloon payload had landed on private property but it was luck and a generous farmer who met us at the gate and gave permission to search for the payload.

Unfortunately, we ran out of daylight so decided to head back into Tara for the night, planning to return and resume the search in the morning.

Another great evening around the fire chatting about amateur radio and all the different aspects of the hobby.

An early start back to the property to met Darrall the owner and to continue the search.
Dan and myself set off on foot into the bush and a few minutes later, Darrall arrived to say he'd found our payload for us.

It was in one piece on the ground with the parachute in the tree above.

Some data logging circuit boards and sensors built by Isaac VK4NEU and Peter VK4PDG had dislodged during the flight and we couldn't find them. The double-sided tape on top of the foam box must have come apart during the high wind journey.

Sadly the camera micro-SD cards had little useable footage either and was a painful lesson learned. When the SD cards are filled, the camera begins to overwrite the earlier footage. We have a little footage, but not the entire flight.

Overall, it was still an amazing experiment and that's what Amateur Radio is all about.

Thanks to everyone who has been part of HABE2, for all your contributions and encouragement. 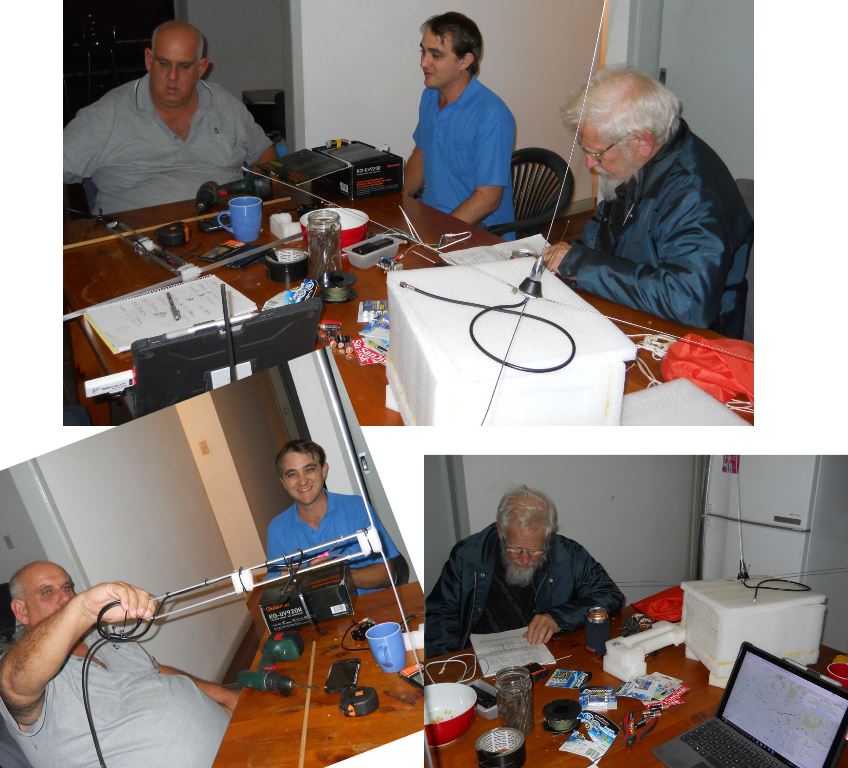 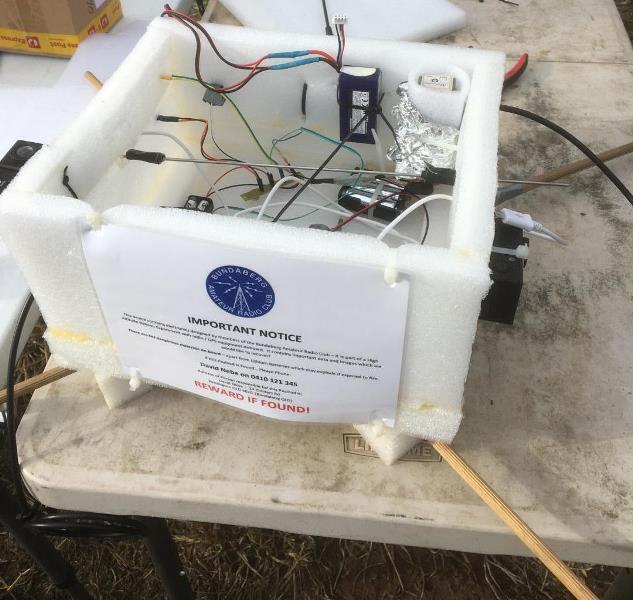 Close up of the payload styrene box

The campsite in the bush near Roma 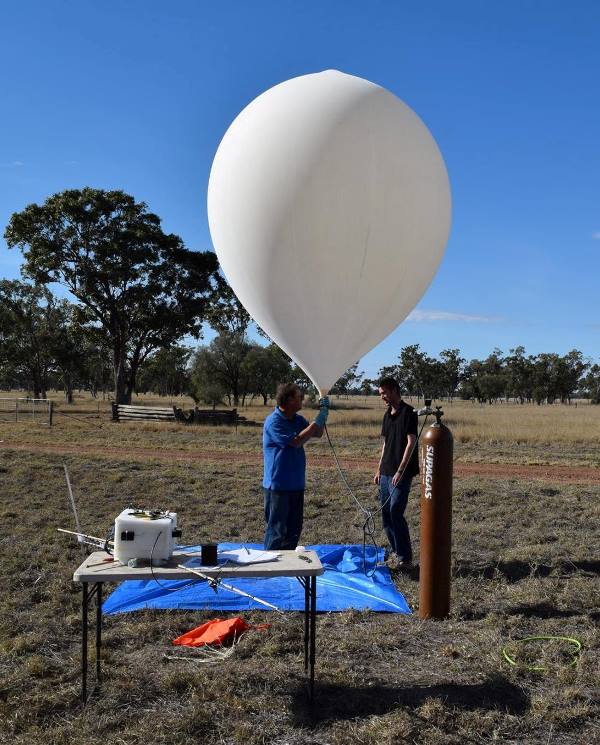 David and Bryce fill the balloon, it's slow going 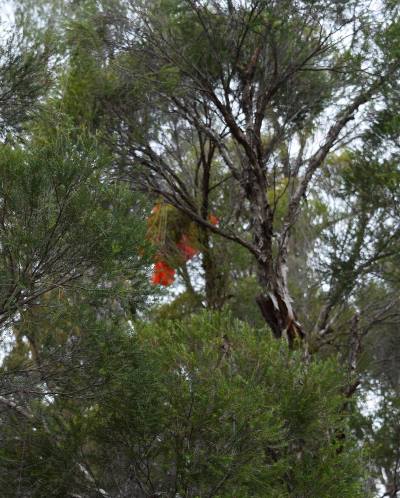 Don't you love a bright orange parachute... made it easy to find when it came down in a tree 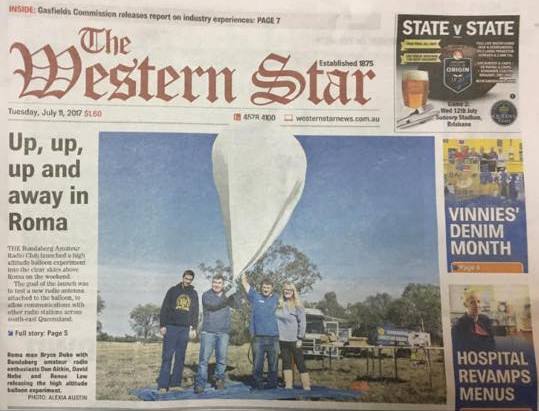 We made the front page of the Western Star newspaper

Sending a balloon to the edge of space 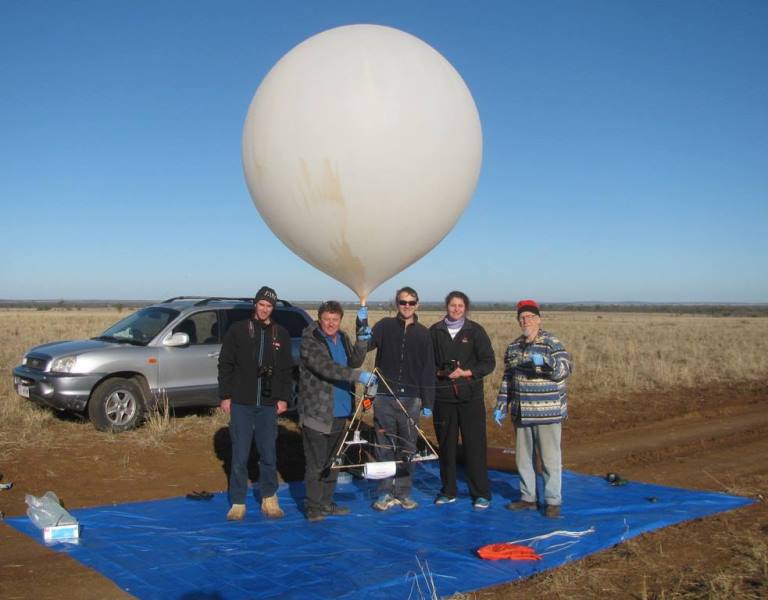 It started in mid 2015 with a crazy idea of sending a Helium balloon to a high altitude with a repeater on-board to see what sort of range we could get compared to our repeaters on mountain tops around Bundaberg.

With a core of supporters with useful backgrounds in repeaters, electronics and APRS the HABE (Hi Altitude Balloon Experiment) group discovered that there is an entire industry out there, focussed on HAB launches. We could look forward to a steep learning curve on APRS protocols, Helium gas and the intricacies of latex balloons.


The core group of club members were David VK4DN, Ron VK4BRG (SK), Peter VK4PDG, Bob VK4UD, Dan VK4OH and behind the scenes we had a lot of support from the Club members and Committee.

We met Brendan VK4HIA from the Sunshine coast who had launched from Dalby the previous year and he even loaned us equipment for our launch.

Plans constantly changed... We had planned to use Dorji boards as radio links but the units from China had poor documentation and couldn't be programmed so instead a Wouxun Cross-Band radio would be programmed as a repeater.
We planned on the uplink on 70cms [431.650MHz] and 2M downlink on [145.500Mhz] as these are designated as "Experimental Frequencies" in Australia and fit the criteria.

Ron built a dedicated APRS transmitter on the National Australian APRS frequency 145.175Mhz using a RadioMetrix HX1 module and hard-coded the VK4BW-11 callsign into the device. We chose Lithium batteries as they work in the extremely low temperatures at high altitudes, and are lightweight. Peter was running flight simulations from various launch locations to see where a balloon might travel and this highlighted the Aircraft flightpath considerations. It was time to sources the major components sourced a fairly large (1500gram) Latex Balloon and then it was time to think about getting approval from CASA for our launch and buy that bottle of Helium.

CASA has the final approval on our launch site and date, and were adamant that a Bundaberg launch was out of the question and we'd have to look further afield. Roma was the first place that got a CASA green light and it was time to lock in some dates.

We settled on Sunday 3rd July 2016, although VK4DN, VK4UD, VK4NEU were the only team members available for the 7 hour trip to Roma.
We used a motel room to assemble the payload using copious amounts of gaffa tape and zip ties until we were happy with the final result.

0700hrs Sunday saw us onsite and laying out a ground sheet and transferring the payload and the balloon ready for inflation. We had a scare with a discoloured patch on the balloon although it turns out this is quite common, but we only had the one balloon and were a little worried.


The electronics were tested, everything was attached and with blue skies overhead we called Air Services Australia (Air traffic Control) to give them the 30minute notification.
We began the filling process and the balloon slowly lifted from the ground sheet and began lifting a bottle of water. Once we had buoyancy with the water bottle, (same weight as our payload), we could swap water for payload add more helium.

A final call to Air Services to advise 'launch-ready', halted the process as they asked for a 5 minute delay due to an aircraft in the area... Talk about suspense!

Finally, after almost 12 months of planning, this was the moment of truth and we were ready to launch the HABE-1.

After the ceremonious countdown from 10 to zero, we let go of the final cord and the balloon went straight up. 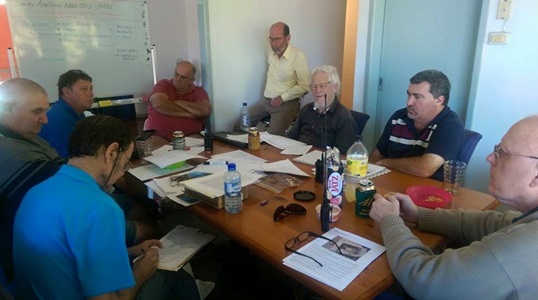 Putting the final touches to the payload

At the Launch site preparing everything for the launch

A special photo just before we release the balloon

Bob VK4UD at Mission Control watching progress of the Balloon 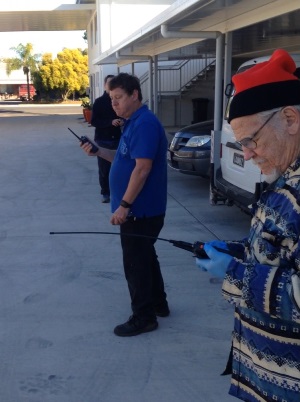 Cameras on tripods began clicking away pointing to the sky trying to get photos as it rapidly gained altitude! After a couple of minutes watching the balloon go skywards on it's journey to the stratosphere, raced back to our Mission Control at the motel. where we had a solid internet connection.

About 20 minutes into the flight, the APRS data started to show up on the aprs.fi website and that was so exciting to see.
We now knew the altitude and GPS data would be available during the entire flight.

A few minutes after that, we started to hear VK stations working the X-Band radio on the payload. These contacts were coming in hard and fast, and we worked 22 stations from Tara, Warwick, Hervey Bay, Bundaberg, Nanango, Gold Coast, Brisbane, Redcliffe, Caboolture and others with the promise of a special event QSL card to all contacts.

We had achieved what we had set out to do. Our balloon had reached a very high altitude (last known at just under 33,000 metres) and we were able to contact stations throughout Queensland via the X-band radio link.

Once we had confirmed the Burst event, (the balloon would have burst with a diameter of 10Mtrs at that altitude), we knew the payload was heading back to Earth and it was time to get mobile and track it.

We'd added a Spot Tracker and had a good idea where it had landed and we could check Google Maps for the Latitude/Longitude coordinates.

It was time to head East from Roma to recover our payload.

It took us about an hour or so travelling and then after opening and closing a few gates on dirt roads and getting permission from a land owner, we reached a spot close to where we thought the payload had landed.

Once we could key up the X-Band radio with our hand-held radios we were getting close and it was time to trek through the bushl.
It took about an hour to locate the payload and we found it in an open field.

Finding the payload made the mission a total success in allowing us to recover the hardware and the SD card with video footage of the entire flight. 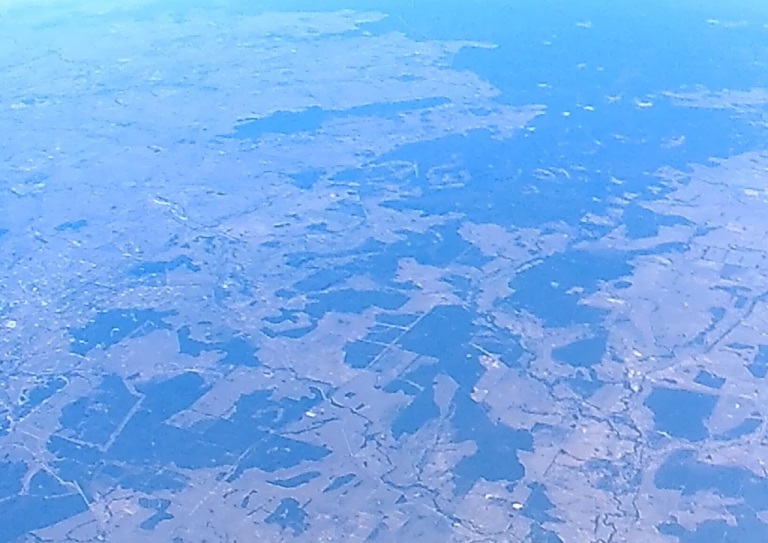 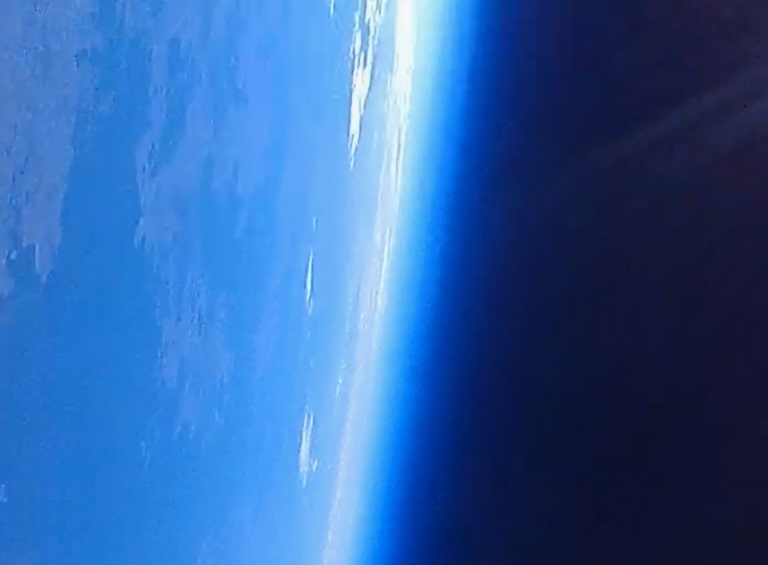 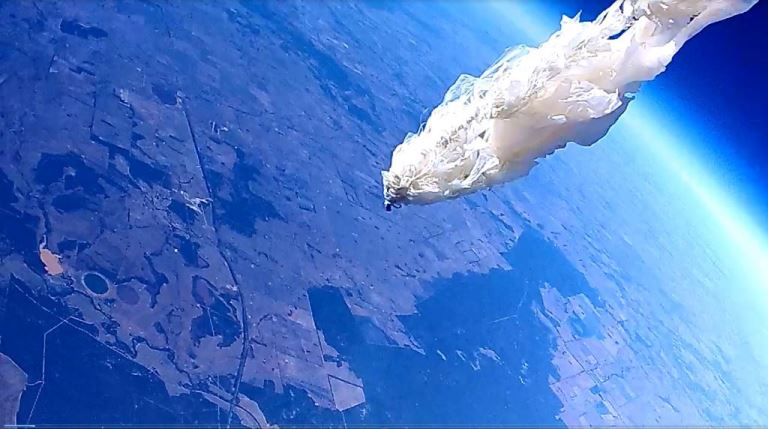 Amazing images from the edge of space
Captured just before balloon-burst and immediately after, as the burst remnants hurtle back to earth.

What an amazing feeling to see this project come to life! Bundaberg Amateur Radio Club is a small group of Amateurs and to achieve this was a once in a lifetime experience. (well we might attempt another one)

Thanks to Peter VK4PDG for running flight predictions, and for the research.

A special thanks to Bryce VK4FMBR from Roma for securing a great Launch site, and being part of the team. You also had the honor of finding the Payload.

And finally the Bundaberg Amateur Radio Club members and committee who supported the project from inception to capture.

Thanks to Ross VK4JRO for advice on the technical aspects.

A hundred things could have gone wrong, but in the end it all came together, well done everyone!

Our favourite photo of the event

If you notice any failures we'd appreciated an email to; webmaster@barc.asn.au

P.O. Box 129 Bundaberg QLD 4670
Or email; secretary@barc.asn.au
This is a link to the current Club Officebearers

If you have a link to share please email the webmaster.
Sites should contain resource material [not commercial links thank you]